Gionee, the Chinese OEM has the Gionee F205 in their records. From the price and it’s average specs, you can conclude that it’s a budget device.

Fingerprint sensor which is very popular in today’s smartphone does not appear on the Gionee F205. If you’re very security savvy, then the Gionee F205 may not be the best for you.

Almost devoid of side bezels, the device sports an impressive aluminum body build. Let’s get to know more… The Gionee F205 has LTE connectivity and is powered by the slightly dated Android 7.1 also called Nougat. Pre-installed with the OS is Gionee UI software, Amigo 5.0.

The smartphone is built solid with round edges and impressive design. Side bezels are almost invisible but the top and bottom bezels exist as wide areas. The Gionee logo lies on the bottom bezels while the top bezel houses the front camera and some sensors. The Gionee F205 performs its operations through a MediaTek MT6739 having four cores and clocks at 1.3GHz. Powering graphics is a PowerVR GE100 GPU. Not the best for optimum performance but okay for a smartphone with the budget price.

Multitasking processes are done by the device RAM which is 2GB in capacity and it pairs with an internal memory of 16GB. The internal memory can be expanded to contain more files and document via an SDcard of up to 256GB size. 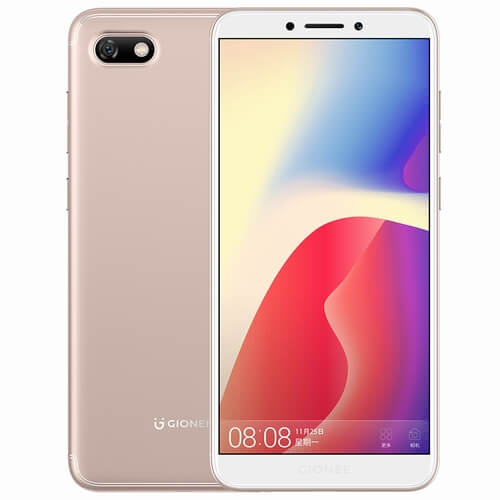 Moving on, the camera setup of the Gionee F205 is low-tier as it shoots with an 8MP rear lens and 5MP front lens. The rear camera has a LED flash to provide illumination for photos. Other features of the rear camera are HDR and panorama.

The Gionee F205 ships with a mediocre battery capacity of 2670mAh which is a non-removable Li-Po type of battery.