The InnJoo 2 smartphone is an upgrade to the Dubai phone manufacturer’s -bestseller – Innjoo one – launched earlier this year.

The Innjoo one was known to be weightless, as well as having a nice design. Innjoo 2 takes after that as well; weighing just 126g and a thickness of 7.3mm while having 2.5D full metal frame. Do not be fooled by the edge to edge display above, It doesn’t possess that, but the display is not bad either; having a resolution of 1280 x 720px (293.72 pixels per inch) on a 5.0 IPS display – although a higher resolution would have been better since this is a “flagship device”. Protection-wise, Innjoo used a dragontrail glass for the display.

This device uses Mediatek’s MT6753 processor – a 64bit octa-core processor (1.5GHz max) which supports 4GLTE. It still beats my imagination why InnJoo did not go for the higher MT6795 (2.2GHz).

Anyways, an octa-core processor means more power consumption, well InnJoo deals with that by cramming a 3200mAh Li-Po battery into the InnJoo 2 (I still wonder how they did it). This device, by the way, supports fast charge. 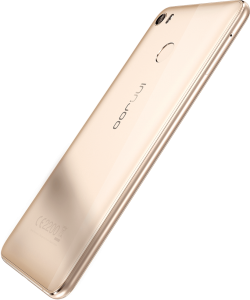 For taking photos, Innjoo 2 has 13MP cameras both at the front of the device, and the rear – with the rear camera having an aperture of f/2.0 (thank God it’s not f/2.2) to allow more light in.

Full device specification and pricing of the InnJoo two in Nigeria are given below: