Tecno Pouvoir 3 is an upgrade to the formerly released Tecno Pouvoir 2 and Pouvoir 2 Pro. It keeps the tradition of the Pouvoir series with it having a 5000 mAh battery.

Pouvoir means power in French and this is is what it is called due to its massive battery size. Tecno claims it can last up to 4 days in a single charge.

The device comes with a 13 MP rear shooter assisted by dual-toned LED flash as well as a 13-MP front selfie shooter. Though the device is powered by Android 8.1 Oreo, we are surprised that it supports stock AR Emoji.

Other features present on the Tecno Pouvoir 3 include a rear-mounted fingerprint scanner, dual Nano-SIM cards, support for 4G LTE network among others. As mentioned earlier, the Tecno Pouvoir 3 has Android 8.1 Oreo installed out of the box with support for AR Emoji.

This smartphone measures 157.6 mm x 76 x 8.5 mm in dimension and the body is made of plastic material. On the rear, a single camera, LED flashlight and a fingerprint sensor are located at center top. 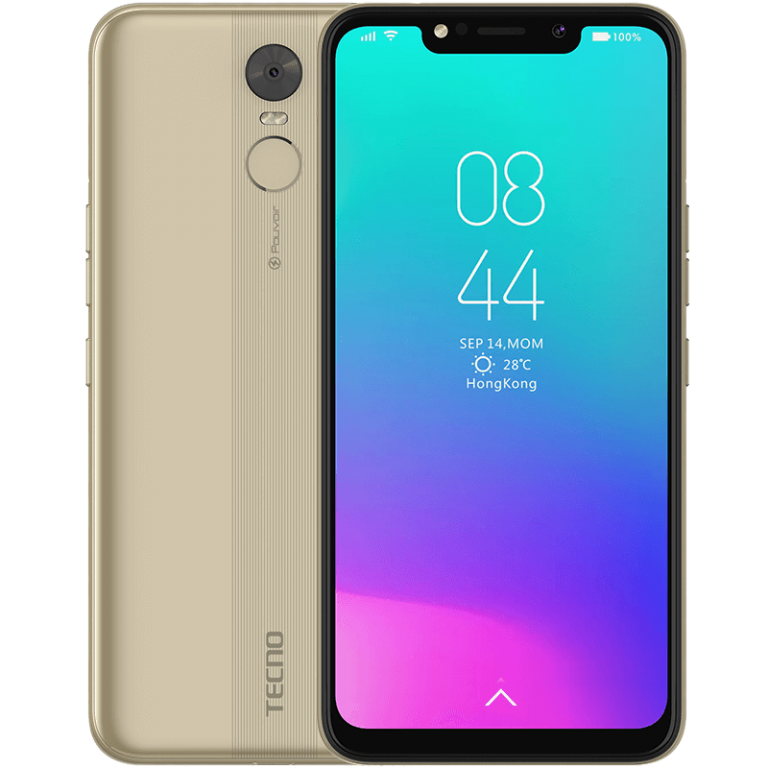 The power button, volume button as well as the dual SIM slots are fixed at the right side of the phone while the microSD card slot takes a position at the left. The device comes beautifully in three different colors which include Gold, City Blue, and Midnight Black.

For visuals, the front has a 6.2 inches IPS screen with an aspect ratio of 18:9 and resolution of 720 x 1520 pixels. The screen gets protection from Corning Gorilla Glass 3. It also has the trending notch design that houses the selfie camera, flashlight, speaker grill, and proximity sensors.

Under the hood of the Pouvoir 3 is a MediaTek MT6739 SoC which is a quad-core processor clocking at 1.3GHz. Graphics processing is handled by the PowerVR GE8100 GPU mounted on the board. For storage, there’s a 32GB internal storage for photos, videos, and files which can be expanded to 256GB via an SDcard. Still on memory, there’s a 2GB RAM for multitasking.

Coming to the camera department, there’s a 13 MP lens placed on the rear side having f/2.2 aperture. Teaming up with this shooter to perform the snapping duties is a dual LED flash. On the front is a similar 13MP camera for selfie duties. This should provide decent photo quality.

The Pouvoir is a power powerhouse sporting a battery capacity of 5000mAh that should provide enough juice for various activities on the phone.