Launched alongside the Fire 4 was the InnJoo Fire 4 Plus which basically is the Fire 4 plus a few improvements; a few of which include:

In fact, let’s just talk about the device. Like the Fire 4, this device is a dual SIM 4G enabled smartphone running on Google’s Nougat flavor of Android with minimal modifications to the UI.

Software updates to this baby would be highly unlikely due to the fact that the brand, going by history, rarely sends out those. 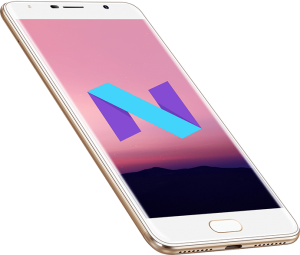 The InnJoo Fire 4 Plus is an “all-metal” device which, by the way, looks very aesthetically appealing.

At the top of the front of the device sits an LED flash and its front facing shooter. At the bottom is a home button which also serves the function of the fingerprint reader as the sensor is embedded on it.

For picture output and touch input, the device features a 5.5-inch IPS LCD panel with a 1080 x 1920 px resolution resulting in a pixel density of approximately 400.

Inside the Fire 4+ (permit me to call it that) lies an octa-core MediaTek SoC; the MT6750T, to be specific.

This chipset basically comprises two quad-core clusters with different clock speeds. The first cluster is clocked at 1.5 GHz while the second, 1.0.

For graphics processing, the SoC is supported by the Mali-T860MP2 GPU and for efficient multitasking, 2 gigabytes of RAM is all the device ships with.

The onboard storage of the InnJoo Fire 4+ doubles that found on the fire 4 (16GB) and it can be extended by a microSD with a capacity as high as 256GB.

To supply juice, a 3000 mAh non-removable Li-Po battery ships within the chassis of this device and to juice this device, the 2V input from a USB type C connector is what you’d be relying on.

Finally, as previously pointed out, the device has a fingerprint reader embedded on the home button in front of the device for unlocking and securing your smartphone. For taking selfies and making video calls, the InnJoo Fire 4 plus has a 5 MP front facing camera which is supported by a dedicated LED flash to its left that provides lighting in low lit environments.

How the dual setup is meant to work is, at the moment, a mystery to me, but I’m guessing that the 5 MP lens would be used as some sort of zoom lens. Think of how Apple implemented the dual setup on the iPhone 7 plus.

InnJoo Fire 4 Plus Price in Nigeria

Like you would expect, the Fire 4 Plus retails for way more than its “younger brother” due to the numerous improvements on various parts of the device.

With a starting price of about N62,000 as at publishing this piece, the InnJoo Fire 4 Plus can be picked up both online and offline in Nigeria today.

At N62k, a dual camera setup, an Octa-core CPU and a premium-ish look, the Fire 4 Plus seems like ‘good enough’ device. However, when you consider its direct competitions in the market today, doubts begin to creep in.

If you are comfortable with the InnJoo brand and would want to own a smartphone with a dual rear cam setup, go for it.

If however, you’d want to squeeze the most value out of that 62k, there may be better options.