Launched in the first quarter of 2017, the Tecno L9 Plus is a supposed battery ‘monster’ from the manufacturer.

Major highlights of the device are its enormous display size and battery hence why it was marketed as a ‘bigger and longer’ device compared to its predecessor. 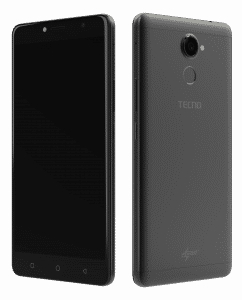 The Tecno L9 Plus is a dual-SIM Android device running on the Nougat flavor of the operating system which is experienced through Tecno’s proprietary user interface — HiOS.

The device itself ships in a metal chassis which can be picked up in various colors (three, specifically) and features a 6-inch IPS LCD display having a resolution of 720 by 1280 pixels resulting in a pixel-density of about 244 pixels per inch (244 PPI).

Under the hood of this device sits a quad-core MediaTek CPU clocked at 1.3GHz which is supported by the Mali-T720 GPU for rendering graphics and about 2GB of RAM for multitasking.

For storage, the L9 Plus is equipped with 16GB of onboard storage which, in the eventuality of you needing more space, can be extended by means of a microSD card.

The battery coupled with this chairman is a non-removable 5000 mAh Li-Ion battery which, theoretically, should hold on for up to 3 days on moderate usage before going off and for security, you have a fingerprint sensor at the back of the device. Although not a ‘camera device’ like them Camons, the L9 Plus features good camera lenses (at least on paper). The rear camera is situated at the center of the device’s back (up top), and an LED flashlight sits directly beside it.

The front facing camera, as customary, sits at the right corner above the display of the Tecno L9 Plus’ front view. A camera which is also accompanied by an LED flash to the right for lighting in low-light situations.

Tecno L9 Plus Price in Nigeria

This device would be particularly well-suited for folks who wouldn’t mind logging around a massive device which, thanks to its humongous battery, is heavier than most just for the device’s power endurance.